Concordia University Press is excited to announce the creation and launch of a new series, Authors, Publishers, Readers, Texts: Studies in Book History and Print Culture. Sponsored by the Bibliographical Society of Canada and under the editorship of Professor Ruth Bradley-St-Cyr (University of Ottawa), the series will publish new scholarship in the fields of bibliography, book history, and print culture broadly defined. The first book in the series is expected to appear in 2020.

Founded in 1947, the Bibliographical Society of Canada (BSC) is a national, bilingual scholarly association that promotes the study of the history, description, and transmission of texts in all media and formats, with a primary emphasis on Canada. 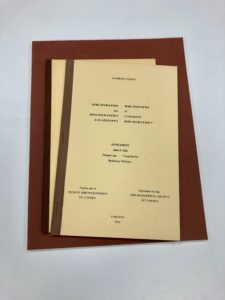 This new series will reanimate the BSC’s important work in book historical and bibliographical research. Books in the Authors, Publishers, Readers, Texts series will not be geographically or thematically restricted, but, like the BSC itself, will have an ongoing interest in Canadian topics and projects. Titles will be published as appropriate in English or French. Membership in the BSC is not a requirement for authors or editors.

As well, to mark the creation of the series, the BSC and Concordia University Press will collaborate with McGill University Library to digitize and re-publish the BSC’s backlist of titles originally issued between 1949 to 1976.

Anyone interested in submitting to the series should submit a proposal, CV, and writing sample from a potential book project to: editor@bsc-sbc.ca.

Concordia University Press publishes peer-reviewed books that are engaged, accessible, and make a point. Launched in 2016, it supports Concordia University’s desire to transform the individual and strengthen society. The Press’s commitment to open scholarship means that digital versions of its books are published online without any access restrictions. The Press’s inaugural catalogue of books will appear in 2019.

This site uses Akismet to reduce spam. Learn how your comment data is processed.